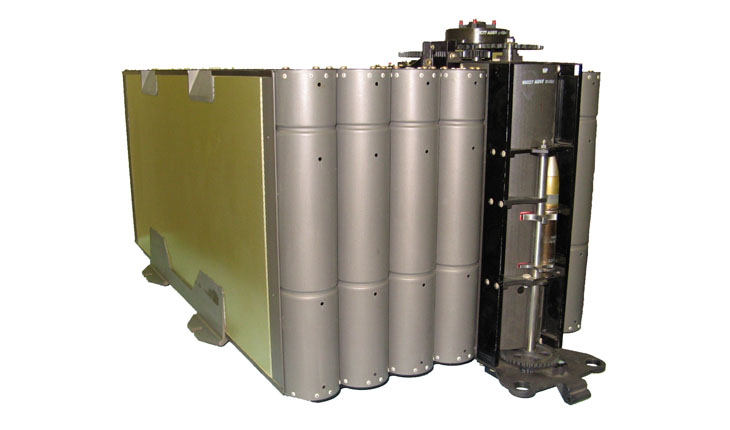 Proven in design and production, and in combat, Meggitt Defense Systems is the leader in medium caliber ammunition storage and transfer for military rotary aircraft with our systems onboard the AH-64 Apache, AH-1W/Z Cobra, and the UH60 Black Hawk.

With a solid record in accelerated design-toprototype requirements that increase capacity, reliability, and volumetric storage efficiency, we develop electric or hydraulic driven systems manufactured to rigorous performance and environmental requirements. Like its predecessor, the 12-PAK, the 660 Round Magazine incorporates proven hardware technology for the Merger, the Accelerator, and at its heart, the Linear Linkless™ Chain Ladder for storage and transfer of LW 30mm rounds.

Linear Linkless™ magazines are mechanically more efficient and weigh less than clip-dependent linked systems. More importantly, our Linear Linkless™ systems are more reliable than linked systems which are prone to jam easily because of improperly fed rounds. Our feed and transfer systems maintain complete control of rounds as they are fed directly into the gun transfer unit, providing overall system efficiency. The 660 Round Magazine emerged from the 12-PAK in answer to a requirement for combat versatility in Black Hawk operations.