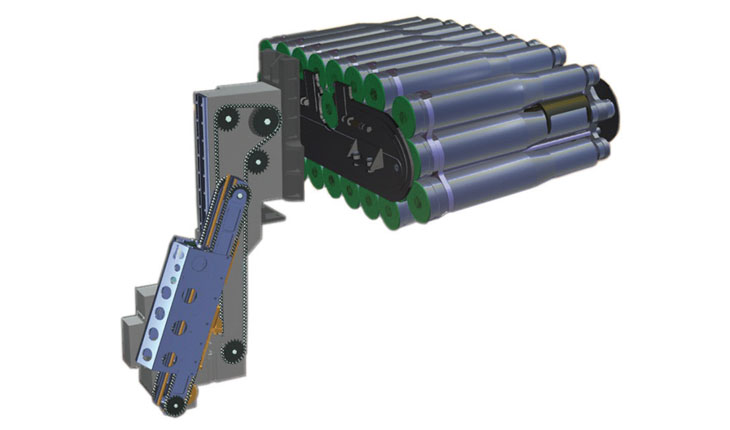 The compact autoloader is an all-electric, fully automatic ammunition handling system designed for easy integration into the M1 weapon station. The magazine subsystem stores 34 ready rounds of 120mm ammunition in the envelope of the M1 bustle. The transfer unit resides completely behind the recoil path of the cannon. Its operational swept volume does not encroach into any useable space within the turret, thus allowing the retention of the full four man crew.

The magazine design utilizes a double-row, closed-loop chain of canisters providing outstanding volumetric storage efficiency. Rounds are brought to a designated pick-off point which eliminates the requirement for the current large bustle blast doors in favor of a solid armored bulkhead featuring a small blast port.

The transfer unit incorporates three degrees of freedom, all closed-loop control, operating in concert to extract, reorient, and load the selected round into the main gun at any weapon elevation between minus three degrees through plus ten degrees. The compact autoloader provides the crew with the ability to fire 12 rounds per minute, on the move, thereby taking maximum advantage of the advances in fire control.